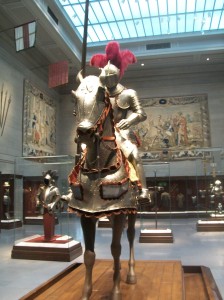 One of the Best art museums in America, maybe the world.

The Cleveland Museum of Art is one of the best thing in an already great city. Like most art museums it contains pictures made with paint. Unlike some other art museums it also contains medieval armor and weapons, Greek statues, modern art sculptures, and so, so, much more.

The best way to experience the museum is to start at the bottom and work chronologically. The problem is that the art world did not start in one place and move to another. Many art forms started and evolved in different parts of the world at once. The museum shows this off quite well. The main hallway opens to many rooms that connect to other rooms. The galleries, although separate, seem to flow well into each other. The Egyptian room leads to the Greek rooms, or vice versa, which leads to the middle ages and so on. This free flowing but chronological order helps to explain the slow evolution of art as a medium for human communication and expression.

Upstairs the art flows in brighter and more open galleries. Yet the treasures still seem to surprise the first time visitor or experienced art lover. Where a person would expect more paintings are arms and armor. Where one would expect to find a hallway a room full of paintings appears. A tucked away hall contains Fraberge Eggs, or Tiffany glass.  Then after hours of wandering the galleries, the biggest surprise of all…

The museum is actually two buildings with a huge covered courtyard in the center. The majority of the ancient western art is in the original 1916 building. Almost as many from the late 19th, 20th, and 21st centuries are in the North building. The North Building also houses the Eastern galleries, Native art galleries, and changing exhibits.

From the wonders of Egypt to the modern day the museum is a treasure trove of sights. Located within the University Circle Collection of Museums The Cleveland Museum of Art is a must see for anyone with a day to fill in the Sixth City.

Quick tips: 1. The Thinker is missing pieces. The story is of why worth finding. 2. Parking in the garage is pricey but other spots can be found. 3. Some galleries open to the outside. The light difference can be quite drastic.