William Howard Taft was the 7th person from Ohio to become president. He became the 27th President of the United States of America. The first Ohioan to become president after the Civil War to not have served. Born September 15, 1857 near Cincinnati. His birthplace is a National Park not far from the resting place of William Henry Harrison and the birthplace of Benjamin Harrison.

He spent a pretty uneventful youth in Cincinnati. He went to Woodward High School. He graduated 2nd in his class from Yale University.  Finally, he gained a law degree from Cincinnati Law School.

After the Spanish American War Taft was named the first civilian

Governor of the Philippines. After serving 1 term he was named Secretary of War, a position once held by his father under President Grant. While Secretary America was given construction rights to the Panama Canal.

In the 1908 election William Howard Taft ran against William J. Bryan, who had previously lost twice to Ohioan William McKinley. Taft beat Bryan hands down in what was one of the most uneventful campaigns of any Ohioan.

During his Presidency many things were accomplished. Taft, a Republican, was a progressive and fought cooperations his whole presidency. Taft created the United States Chamber of Commerce.  In 1909 he implemented cooperate income tax and prepossessed what would become the 16th amendment, allowing the government to tax income.
Taft would run again in 1912, against not only the Democratic nominee Woodrow Wilson, but also former President Roosevelt. William Howard Taft was not a great campaigner and lost to both of 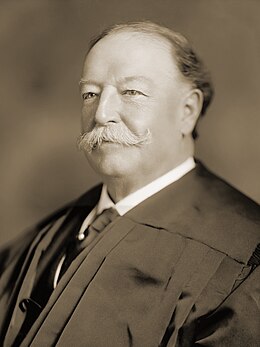 his competitors. This lose was not the end of his political career. On  June 30th, 1921 Ohioan and President Warren G. Harding nominated Taft to Chief Justice of the United States Supreme Court. Many important rulings were handed down under his tenure. Carroll v United States, which made searches of vehicles without a warrant legal,  still resonates today.

In the end his many health problems would catch up to him. He died of cardiovascular disease on March 8, 1930. He was buried in Arlington National Cemetery. He was the first president and the first Chief Justice to be buried in the cemetery.

P.s. Taft was a huge fan of Baseball. He was the first president to throw out a ceremonial pitch. To commemorate this the Nationals have made him a mascot. Follow him on twitter @NatsBigChief27.

Did he get stuck in a bathtub? The myth is that he did, but the truth is that he probably did not. The rumor started after a comment in a book by the former White House usher.