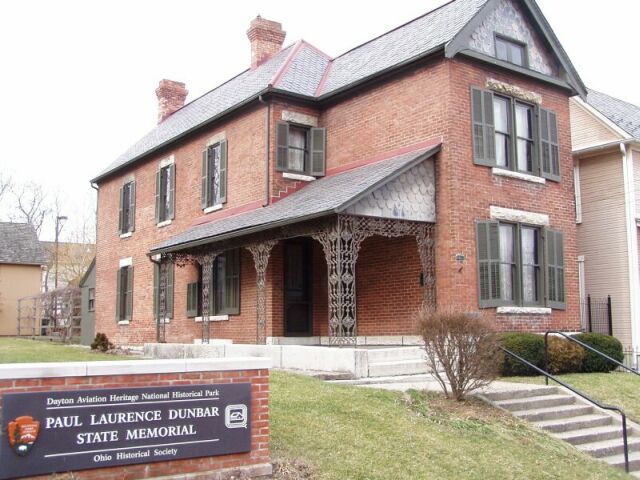 Paul Laurence Dunbar was an African American poet at the turn of the 20th century. He wrote in both dialect and standard English. Dunbar became famous as a poet after self-publishing Oak and Ivy, his first book, in 1892. After the popularity of the book he began to tour around the state, then then the nation, and finally England.  At the height of his career in 1902 Dunbar bought a house in Dayton for his mother. After he started to suffer medical issues he moved in to the house with his her. On February 9, 1906 in this house he died of tuberculosis.

The House was bought by the state in 1936 and turned into the first state memorial to an African American. It was later in the century that people started to notice his works effect on the larger literary world. Maya Angelou even named her first book after a line in his poem “Sympathy.” In 1962 the house became a National Historic Landmark. 30 years later it was incorporated in to larger Dayton Aviation Heritage National Historical Park when the park was created.

The Paul Laurence Dunbar House Historic Site is a small location with just the house and accompanying visitor center. The center contains a short film on the life of Dunbar, a few of his artifacts, and information about the history of the house. The House itself is a small 2 story building common of the area. Together the entire site can be visited in 1.5 hours.

While that may seem too small for a journey to the area, the House is only 1/2 mile from the Dayton Aviation Heritage National Historical Park’s Wright-Dunbar Interpretive Center. The center contains more information on the life of the printers of Dunbar’s first Newspaper, Orville and Wilbur Wright. One could easily spend an entire morning visiting both the Paul Laurence Dunbar House and Wright-Dunbar Interpretive Center, grab lunch at one of the areas great restaurants, and spend the heat of the afternoon walking around Woodland Cemetery where both the Wright Brothers and Paul Laurence Dunbar are buried. With the Carillon Historical Park, National Museum of United States Air Force, and the rest of the Dayton Aviation Heritage National Historical Park one could make a long weekend in Dayton. Even being rewarded if they go to enough places.