The history of Recreational Vehicles took a turn when Wally Byam acquired the Bowlus Company, took the door moved it to the side and created the Airstream Clipper. For about the next 16 years, except for a period during the war years, Airstreams were only manufactured in California. In July 1952 a factory was opened in Jackson Center, Ohio. In 1979 the California plant was closed, leaving Jackson Center as the only place in the world where the unique trailer is produced.

The Factory is located just down the highway from Armstrong Air and Space Museum. The tour starts at 2pm and leaves enough time in the morning to go the museum and have lunch at Al’s Woody’s Diner. The Airstream Factory also is a fitting location with the museum because NASA used Airstreams as Mobile Quarantine Facility for the returning Apollo 11 crew. 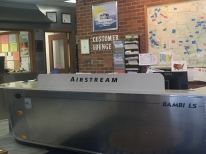 The Factory tour starts at the Service center. The center is where Airstream gifts and parts can be bought before the tour. As the name says it is also where Airstreams are brought to be serviced. The tour is popular thing to do while waiting on service. The guide will give each person a pen (a great souvenir) to sign a waiver and give out ear and eye protection. The tour is on the actual factory floor and protection is needed.

The tour starts with a brief history of the company before heading outside. On the way to the main factory the guide will show some of the campers parked outside. This is not a museum tour or a Dealers lot. Wally Byam’s Gold trailer, “Stella’s Gold Airstream,” is there but the rest are finished trailers about to be sent out and not really for display. 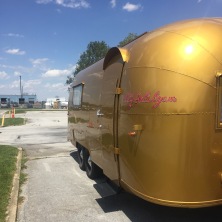 Inside the factory the noise can be loud at places. The earplugs protect visitor’s ears but also block out the guides voice. To get around this one member of the group is given a portable speaker and is kept at the back of the tour. The guide can be heard from the front and back at most times, even over the noise of the factory. Sometimes the noise and spread of the group will make it hard to hear.

The tour goes through the process of constructing an Airstream from the ground up. Well more from sides to the floor to the internals. While it might not seem like much at first. Eventually the trailer comes together to the memorable shape. After the trailer is weather tested it is ready for interior. The interiors and wiring are added and the final product is ready to ship.

Overall the tour is a little under 2 hours depending on the size of the group. The distance walked can be close to a mile. The process of building one of the most memorable trailers on the market is fun to see and the price (FREE) can’t be beat.

When we went the second factory building was being retooled for the next model years line of bus style touring coaches. Expect an update when we get a chance to return.