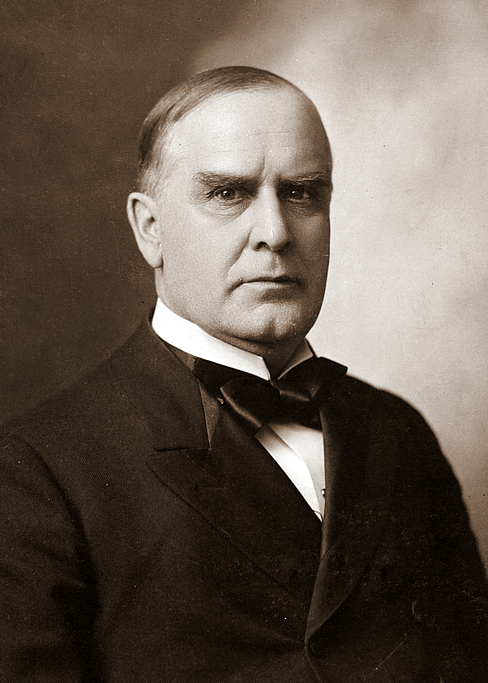 William McKinley was the 25th President of the United States of America and the 6th from Ohio. He was born on January 29, 1843 in Niles, Ohio. His birthplace is now part of a museum and research center. He spent his schoolboy days in Poland, Ohio and went to college at Allegheny College, in Pennsylvania. He only spent a year there before returning to Ohio and going to Mount Union College. McKinley left there early too.

After the attack on Fort Sumner many men in Ohio joined the army. McKinley was one of many that became privates in the Union army. Because of the sharp rise in

enlistments, supplies were short. This caused problems between the enlisted men, including McKinley, and their officers. Rutherford B. Hayes , a major at the time, convinced the men to take what was given. Hayes’ style of leadership impressed McKinley and they formed a lifelong friendship. McKinley saw much action through out the war and served under many different commanders.  By the end of the conflict he had risen to the rank of Brevet Major. William McKinley was the last person that served in the Civil War to become president.

After the war McKinley returned to Ohio to study law. Eventually he partnered with George W. Belden in Canton, Ohio. His law practice made him rich enough to buy an entire block of buildings in Canton. When Rutherford B. Hayes ran for Governor of Ohio McKinley made speeches for him. This was the first time McKinley had entered in to politics, but would not be the last.

William McKinley soon met and wooed Ida Saxton and they married on January 25, 1871. on Christmas day of that year they had their first child, Katherine. Two years later they had their second child, Ida, but she died with in a few months of birth. Only two years after that Katherine too died. This lose of both daughters sent Ida into a deep depression that would effect the rest of her husbands political career.

Despite her own problems Ida encouraged William to go further into politics. In August, 1876, McKinley was nominated to the republican seat of the 17th Ohio district. At the same time fellow Ohioan, and friend, Rutherford B Hayes was running for office of President. McKinley was not only successful in winning his own seat but was a great help in Hayes win the most contentious presidential race in history.

m run for Governor of his home state. In 1891 he won the election becoming the 39th governor of Ohio. After 1 term in office McKinley decided to make his run for president. In 1896 he ran against William J. Bryan, soon to be known as the prosecutor in the Scopes Monkey Trial. As with most Ohioans who ran for president before him, McKinley used the front porch campaign style. His campaign would become the most famous use of this style.

William McKinley’s presidency is best known for  The Spanish-American War. Cuba had been fighting for independence from Spain for many years. McKinley thought that the conflict could be settled peacefully, but sent in the USS Maine to protect American

interests in the area. While in harbor the ship blew up. At the time many newspapers advocated war but McKinley wanted to wait for the outcome of the investigation into the indecent. In the end war was inevitable. The war soon expanded to the Pacific with the involvement of  Spanish controlled Philippines. Lasting only 3 months, the war would have a huge impact on the politics of both Cuba and the United States up until the present day.

The victory in Cuba and the popularity of his first term made for an easy run for reelection. This time, however, McKinley would need a new running mate, as his vice president had died the year before. He choose Teddy Roosevelt, a leader of the “Easy Riders” during the Spanish American War.

As popular as he was , McKinley’s second term was not to last long. On September 5th, while on a trip to the Pan-American Expo in Buffalo, he was shot by Leon Czolgosz. On September 14th, William McKinley died. He was the 5th president to die in office. His death lead to much grief through out the nation. The president was put to rest in the receiving vault of West Lawn Cemetery until his final resting place was completed. On September 30th, 1907 the William McKinley Memorial was dedicated in Canton, Ohio. One can still visit the impressive marble building and pay respects to one of Ohio’s Great Eight.

P.s. The  Mountain was named after him during his first presidential campaign. A gold miner who supported his stance to keep the dollar tied to gold gave it the name. Later when the park was created around it the name stuck.