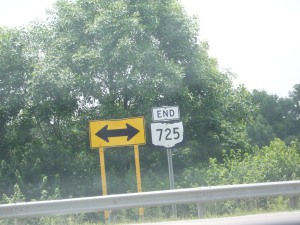 The eastern start to the route is begins near Spring Valley. The route then winds through until it reaches Bellbrook.  Bellbrook is know for Jonathan Winters and writer Erma Bombeck, not that one will see either in the city or historical site to them.   The next point along the way is Washington Township. Washington Township has many national and local stores and restaraunts along the route. The Town Hall Theatre is also along the route.   Along the drive you will next go into the Dayton Mall Area with its many shops and restaraunts. A short drive near  Route 725 in the Dayton Mall area you will be able to get to Cox Arboretum. Cox Arboretum is a 189 acre garden park with many flowers to look at.  The next town you will wind your way through on Route 725 is Miamisburg.  While in Miamisburg make sure to stop off at Rons pizza for a pizza or a delicous sandwich. After leaving Mamisburg on Route 725 you will be venturing into small towns with farms in between.  Germantown is the next village on route. The portion of 725 near Germantown passes by Germantown MetroPark. Germantown MetroPark has many nice hiking trails and good nature center.  The next to villages on Route 725 are Gratis and Camden.  Camden is near Hueston Woods State Park, a nice place to go for a boat ride, hike, or a stay at the resort.  After leaving Camden State Route 725 nears its completion when it turns into Route 44 in Indiana. 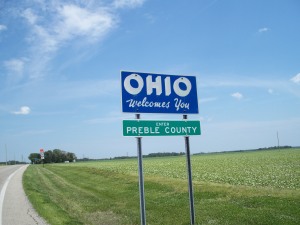 State Route 725 is a great drive with many small towns and scenic roads. The western part is the most spread out with rolling hills and farms. The eastern part is more populated with towns full of shops, theatres, restaraunts, and activites. State Route 725 is a great drive for a Sunday afternoon when the weather is warm and sunny. One is sure to find something to see along the way.